Parvathi Nayar - Art With A Purpose 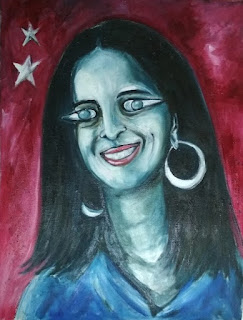 Creativity is often about looking at an old thing in a new way. About juxtaposing two unconnected ideas, and joining the dots no one else can see. Sometimes it could mean coming up with an oxymoron, two totally contradictory notions as one, such as ‘tragic comedy’ or ‘Hell’s angels’. Or even ‘beautiful filth’.

That’s what Chennai-based artist Parvathi Nayar has presented at the DAMned Art Show (another oxymoron in itself). An inspired installation in the shape of a beautiful, simple kolam, filled with ugly, filthy things picked up from the banks of the Adyar river.

For those not in the know, a kolam is a typical, traditional decorative motif that most South Indians create with rice powder in front of their thresholds, or gateways. It symbolizes good luck and positive energy, welcoming all things good.

To add filth to something that symbolizes cleanliness and godliness is hardly thinkable. To actually make a Kolam with all the world’s trash? Brilliant! Old tooth brushes, empty medicine and liquor bottles, broken toys, odds and ends of plastic, rubber slippers, you’ll find it all there and then some in this Kolam that poignantly brings home the truth that even as we carefully decorate our doorways with pretty designs that are easily wiped away, we’re even busier decorating our streets, our rivers, the outskirts of our cities with trash that cannot be wiped away any which way anytime soon unless we make some conscious changes. 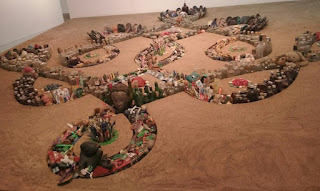 Here is art with a purpose, not to find a solution, as Parvathi says, but to raise awareness among the citizens and a possibility of finding a solution. Called ‘Reimagined River: Invite/Refuse’, Parvathi’s exhibit includes besides this kolam a video presentation, some ceramic sculptural algae and other life forms found on river beds, and some enigmatic and meditative drawings done with pencil on gesso painted wooden boards. She is the only Chennai-based artist among the 20 artists, both Indian and International, who collaborated to bring the 13 thought-provoking installations that are part of the DAMned Art Project organized by the Goethe Institut, Chennai, to focus public attention on the damage done to our rivers and waters and to actually have the people embrace them.

Originally conceived to be presented on the banks of the Cooum, Chennai’s filthiest river, the installations, and other multimedia presentations, are now on exhibit at the Lalit Kala Akademi, Chennai, till the 4th of March.


Parvathi Nayar is a multidisciplinary artist who creates intricate drawings which look like abstracts but are really representations of the real blown out of proportion, as seen through a microscope. She is also a writer, a poet, and commentator on contemporary culture. She has shown her works at several national/international shows and venues including the Kochi-Muziris Biennale (2014), CP Biennale II Indonesia (2005) and the Singapore Art Museum. 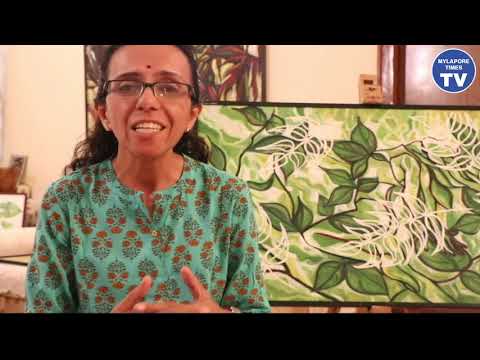